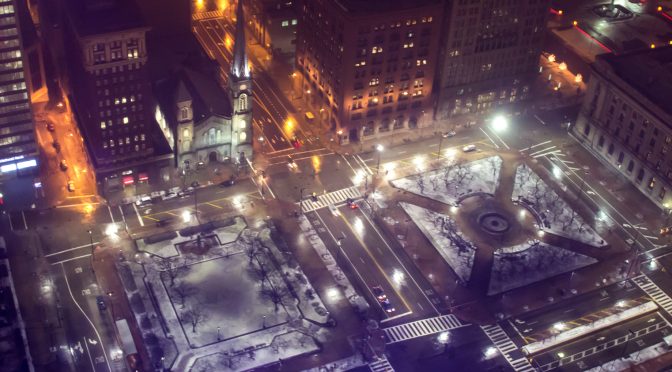 Last night I had the chance to visit one of downtown Cleveland’s iconic places, the observation deck located on the 42nd floor of the Terminal Tower. According to my brief research, the observation deck has been closed since 9/11, and it is only opened every now-and-then on rare occasions.

Tickets to these events sell out quickly, but I was lucky to be invited by Tony, who had two tickets. (check out his pics @ T-Fizzle Photography)

On a clear day, the observation deck promises a 30 mile / 360 degree view of Cleveland. Despite last night’s cloudy and snowy weather the view was amazing, and I managed to take some usable shots.

Here you can see two pictures of the Key Tower reaching the clouds. They Key tower is the tallest building in both the city of Cleveland and the state of Ohio.

Looking out of an other window there was the “Q” and Progressive Field, home to the Cavs and Cleveland Indians. The traffic was slowing down after the Friday afternoon rush hour.

It was interesting to see the BP Tower from above.

Taking these pictures were tricky to me, since my hands are not too steady, and bringing a tripod was impossible.

In an effort to stabilize my shots I pushed the lens against the window, this also helped reduce the glare from the thick observation deck windows.

Finally, this is a view of Public Square from above. I’m glad I had the chance to visit this place. I believe the observation deck will be opened again in April during the daytime. Make sure to get your tickets before they sell out!